Phantom Assassin and Juggernaut are two of the most iconic carry heroes in Dota 2. They have been in the game for a very long time, and the latter is often recommended to newer players as the first carry to learn. However, both heroes are currently underperforming in the highest level bracket, and we would like to discuss the reasons behind that.

Both Phantom Assassin and Juggernaut rely on their passive crits to deal damage. Naturally, PA is considerably more dependent on it and it is one of the reasons she underperforms not only in the Divine+ games, but in all pub games. It isn’t bad luck or even necessarily bad plays that are to blame, however. The truth is, both these heroes typically need specific help to truly shine and be able to go toe-to-toe with the other meta carries.

Neither of these heroes have exceptional stats. PA does have a pretty decent Agility growth of 3.4, but it is considerably smaller than Terrorblade’s 4.8 or Morphling’s 4.3. Juggernaut gains 2.8 agility per level, which is even worse, but at least he has a lower BAT of 1.4 to compensate for it.

What these heroes do have, however, are built-in crits. Juggernaut gets a 180% crit with a 35% chance to proc, while Phantom Assassin gets the “best” crit in the game of 450% damage with a 15% chance to proc. The expected damage from their attack is then 128% and 152.5% of their attack value respectively.

What they do get as a tradeoff, however, is better scaling in terms of damage output. Every attack damage bonus they get will benefit from their crits. That is why these heroes might underperform in pubs: they demand specific allies.

In a vacuum, Phantom Assassin or Juggernaut won’t be able to go toe-to-toe with a hero like Terrorblade in the later stages of the game at equal net worth: the extra armor, attack speed, and damage from higher agility growth will make Terrorblade and many other carries mathematically stronger heroes.

In a regular 5v5 scenario, however, the story is quite different. Juggernaut and Phantom Assassin do get supernormal benefits from any buffs so next we are going to discuss the best teammates these dependant cores can have.

We’ve recently talked about this hero being top tier and Alacrity is one of the biggest reasons for it. While everyone always cheers for a great Cataclysm or a well-rolled Meteor, Alacrity is kind of a low-key best spell Invoker has access to. With a level 20 talent and Aghanim’s, it gives 165 extra damage and 165 extra attack speed. This is almost three extra slots of free Butterflies, with a nine-second duration and 50%+ uptime.

On its own, it adds extra 740 damage to a PA crit or 300 damage to a Juggernaut crit. When used correctly, this ability is far from being fair. It also conveniently lasts roughly the same amount of time as a fully charged BKB, to prevent potential dispel counterplays.

Empower is a far cry from what it once was, at least in terms of helping teammates, but it is still a very powerful farming acceleration tool and a decent attack damage steroid. 32% extra damage is definitely not even close to what Invoker can offer, but the buff lasts a much longer time and has uses outside of the actual team fights.

Moreover, one shouldn’t underestimate the effectiveness of the cleave effect in team fights. Good positioning certainly mitigates a lot of its power, but when dealing with illusion heroes or summons, cleave can be a game-changer. The aforementioned Terrorblade can easily have two illusions by his side, each dealing 60% of his base damage. They can be very problematic without cleave and almost a non-factor otherwise.

The attack speed statistics is hidden in the UI and, over the years, this has led to the community as a whole underestimating it as a DPS tool. You can always see your damage on your hero bar and get satisfaction from the number going higher and higher. You have to search for Attack Speed and even then, it is a bit harder to understand. The fact that it then converts your AS to a baseline 1.7 BAT value only adds to confusion on heroes with non-standard BAT.

We won’t go into much detail regarding the mechanics behind attack speed. The general idea is that for every 100 attack speed, you increase the factor by which you divide your BAT to get the time required for an attack. Theoretically, Queen of Pain with a BAT of 1.5 and 300 Attack Speed will have an attack “cooldown” of 0.5 seconds and will therefore attack twice every second. 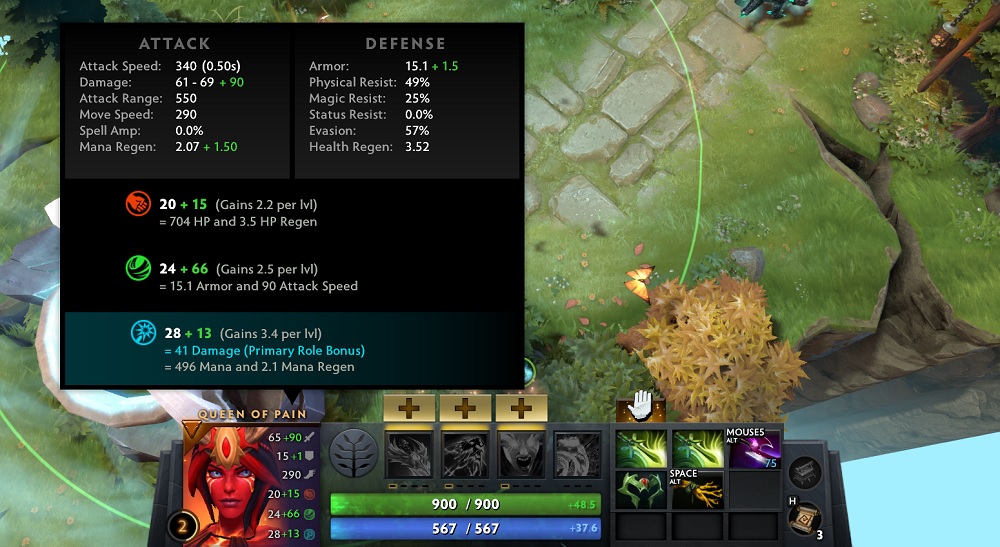 What that means overall, is that while buffs like Bloodlust and auras like Inner Beast are undeniably strong and nice to have, Phantom Assassin and Juggernaut don’t get any supernormal benefits from them, compared to any other heroes, when auto-attacking is concerned.

Do note, however, that Juggernaut specifically has an Attack Rate buff on Omnislash and, consequently, Swiftslash from Aghanim’s. In this regard, any Attack Speed buffs are more than welcome on the hero and the hero as a whole can and seemingly should be built around it.

Over the years we made several blog posts regarding armor, and they are recommended reading. You can find them here and here.

There is one key point that is very important for the current discussion: you can think of negative armor effects as a damage multiplier for attack damage calculations. The resulting conclusion should be self-explanatory: these effects are great for heroes who rely on auto-attack damage and both Juggernaut and Phantom Assassin will get supernormal benefits from them.

Sixteen armor is roughly 50% physical damage reduction. Getting this value to zero, therefore, is, basically, doubling the damage. For a regular hero, the expected damage then is 100% of what is written in the damage breakdown, compared to 50% without negative armor effects. For Juggernaut and PA the differences are 128%—64% and 152%-76% respectively. The same logic holds true for all but abnormal armor values.

What does it all mean for your pub games? Not much, really: if you enjoy playing Phantom Assassin or Juggernaut in your games, we are not in a position to advise you against it. What we can say is that by communicating with your team during the draft, you can drastically increase your win rate without any changes to your own playstyle: you just need the right teammates.

Leave us a comment if you found this post useful and interesting. If you want a deeper and more technical discussion about Attack Speed mechanics in a future blog post and what they mean for your DPS, do let us know as well—Dota Mechanics are intricately balanced, but not necessarily the easiest to understand or well-documented.