How to Destroy Dummies in 2 Seconds in Genshin Impact for “Ellin, the Wannable Knight” Daily Quest

You can destroy all dummies in 2 seconds in Genshin Impact by first bringing all of them very close to zero health and then using an attack that can hit them all at once to destroy them. You see the solution to the trick and the daily mission is all in the wordings. When you meet Ellin the Wannable Knight in Mondstadt, she will ask your help to destroy training dummies in 2 seconds.

If you go by that trick, all you need to do is attack all the dummies equally so that all of their health comes close to zero but none of them is destroyed. Once they are all at just one point of their health, use big attacks that can hit several dummies at once to destroy them in 2 seconds. You can use attacks like Sweeping Time, Elemental Burst, Explosive Puppet, or Bomb. 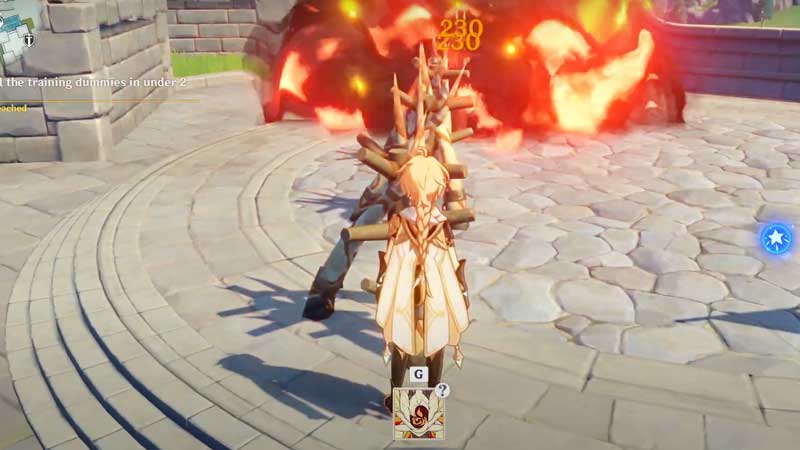 The formation of dummies will be random on different days. If they are in multiple groups, you will have to switch between characters quickly and time your attacks in such a way that you can finish all of them off within 2 seconds. Once all the dummies are destroyed in the given time, talk to Ellin to get rewards for completing the daily quest.

That’s everything you need to know about destroying dummies in 2 seconds in Genshin Impact. Update 1.1 has brought in several new contents. There is a whole new City Reputation System, then there are new areas to explore and newly harvestable to farm. Reading our guide on how to complete bounties in Genshin Impact will help you level up your City Reputation to get rewards. You should also consider reading where to find Bamboo Shoots a new harvestable item that can help you prepare food recipes.