I hear you’re about to go diving into failed startups. Don’t you know that the world of tech is dangerous and extremely random? There’s no cause for alarm, though. I’m here with several hours of experience under my cardboard belt and am going to share some helpful tips to push you in the right direction while beating demons to death with hockey sticks.

The stoplight is your friend

One of my favorite skills in Going Under is represented by a stoplight that makes Jackie move and attack faster. Since how quickly you attack and move are paramount to survival, this is my go-to skill that I think should be endorsed as soon as possible. And who doesn’t like being faster? Nobody, that’s who.

During the first half of the game, it can be very helpful to grant yourself a few additional heart containers by purchasing the life upgrade drink. But during the second half, you have six heart containers by default and it’s a much better idea to buy items that keep those filled versus adding more that you simply won’t be able to heal. Regular healing items are also much cheaper, so there’s that.

Ray’s bonus can make for an easy win

Ray’s initial mentor bonus gives you the ability to buy things you can’t afford, which puts you in debt. I know, having a ball and chain around your legs absolutely isn’t preferable, as it slows you down massively. But if you endorse the upper body strength skill, Jackie can pick the debt ball up with ease and use it quickly. Not only that, but it doesn’t break! Therefore, a lot of the time, the biggest penalty for buying more health items than you can afford is that you get unbreakable heavy weapons. On the flip side, sometimes the debt balls multiply when you go down a floor, so don’t go too deep in debt, okay?

The caffeine app is great for bosses

One of the apps you’ll come across in Going Under gives you three uses and temporarily massively buffs Jackie’s speed. This is helpful in general, but if you can save them for boss fights, you can do ridiculous amounts of damage in very short order. When coupled with the right skills, you can win even if you go into a fight without necessarily having the health to normally survive it.

Take out the ranged enemies first

It can be tempting to go after the bigger foes right away but the ranged ones are your biggest worry. The camera in Going Under doesn’t always give you the best view and you’ll definitely get shot in the back if you’re trying to fight melee enemies while a ranged one is present. There just won’t be a lot of time to dodge attacks and you’ll be more open to melee attacks in the split second after, so prioritize getting rid of ranged attackers and you’ll be much safer. 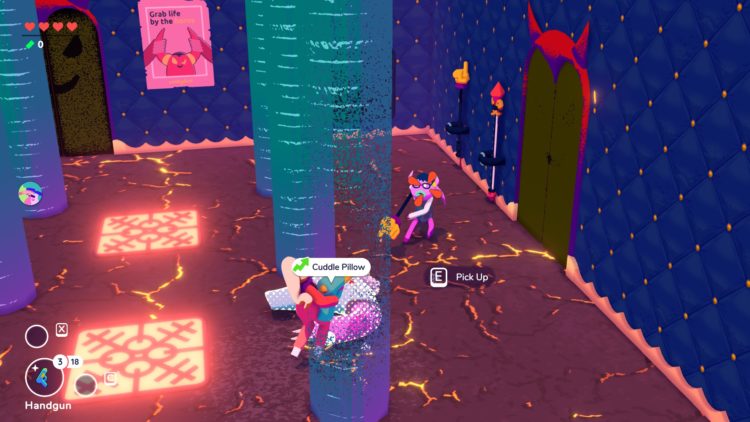 That’s it for our Going Under tips. It can be a fairly tough game later on but there’s a lot you can use to your advantage. The most important lesson is: don’t get a job at Cubicle. The way they treat their employees is monstrous.