Basil II of Byzantium joins the fray in Civilization VI: New Frontier Pass. I’ll just get this out of the way: Byzantium might be one of the best civs around. It’s all thanks to the synergy among uniques and incredibly powerful boons. Here’s our deity guide to help you out.

Who is Basil II?

Basil II was the Byzantine Emperor from 976 to 1025 AD. Likewise, he had been co-emperor (a junior ruler) many years prior. Basil II’s reign was considered a high watermark period for the Byzantine Empire which had experienced numerous setbacks for generations. A shrewd, calculating, and laser-focused leader, he managed to bring glory to his lands by achieving victory in many conflicts.

He was also known for his ruthlessness against the Bulgarians. Back then, the Bulgarian Empire had been a thorn on the side of Byzantium. To finally end the threat, Basil II took 15,000 captives after the Battle of Kleidion. It was said that he blinded 99 out of 100 men — the last man in each group had only one eye put out and was goaded to bring the remaining survivors back to their homeland. This act of cruelty had so shocked his rival ruler that he died of a heart attack. Basil II might’ve been celebrated by his countrymen. However, from that point onwards, he was known as “Basil the Bulgar-Slayer.”

Basil II won’t face off against Bulgaria in Civilization VI: New Frontier Pass. Don’t fret because he has numerous foes to contend with, and many of his unique capabilities are truly effective even in deity difficulty.

You can see Byzantium’s uniques in the video above. Still, to make things clearer, they are: 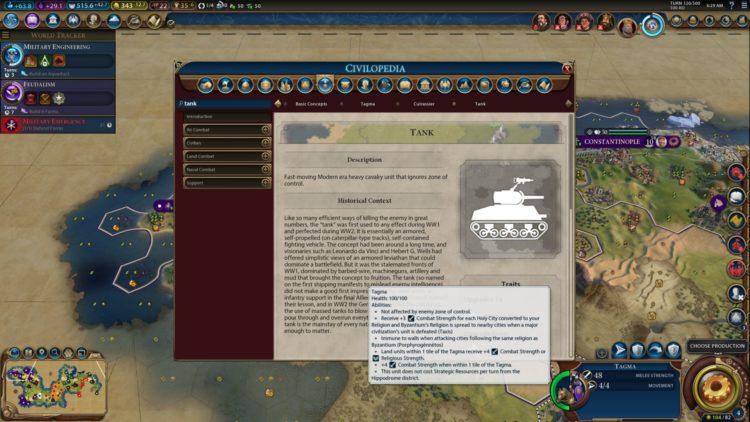 Below, you can see the settings I’ve selected for my deity run as Byzantium in Civilization VI: New Frontier Pass. A small Pangaea map with four opponents definitely makes things faster than, say, a huge continents map with dozens of foes. Be reminded that I didn’t enable any of the special game modes. 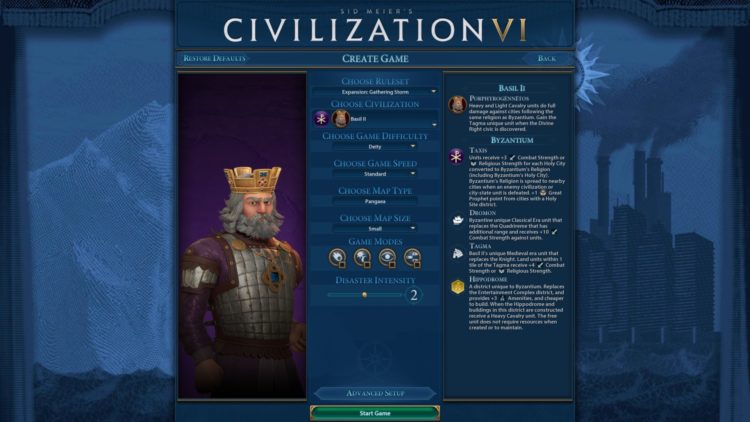 Unlike some of the other nations in Civilization VI: New Frontier Pass, Byzantium doesn’t rely heavily on the terrain. Of course, you should still try your best to find spots that provide production and faith.

In my case, I was restarting my campaign when, on my second attempt, I got a pretty decent start. The Chocolate Hills, a natural wonder that you’ll find in Bohol, Philippines, was right next to my starting location. Since I’m Filipino, I knew this was destined to be a great deity run. 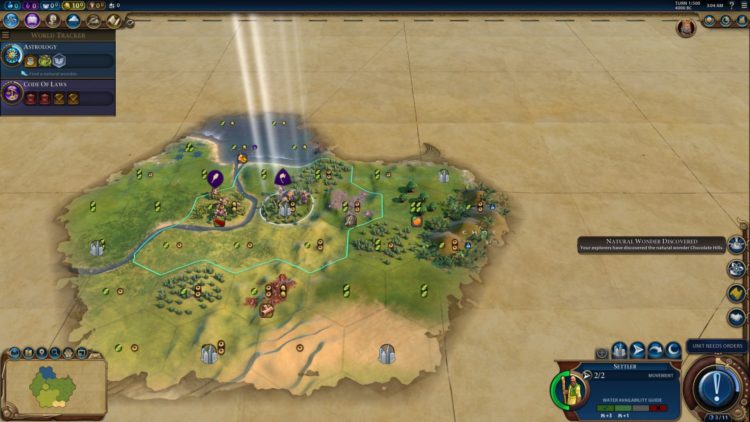 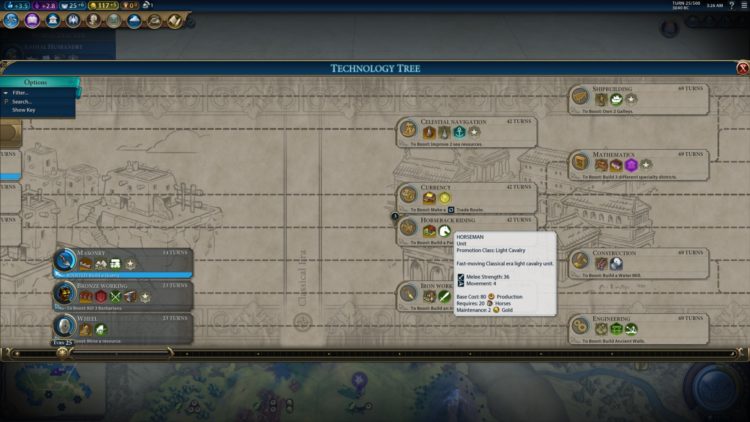 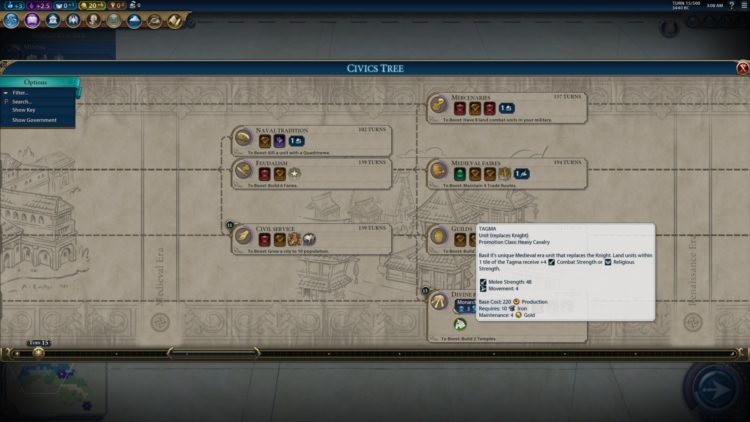 Below, you’ll see the policies I had after picking the Oligarchy government type. These are to help me churn out an army towards the end of the Classical Era and at the beginning of the Medieval Era. 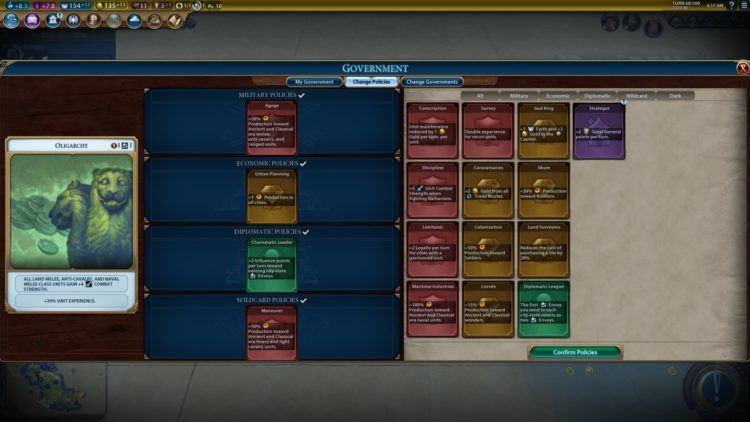 Next up, here are my picks for the Monarchy government type after discovering the Divine Right civic. You’ll notice that my income dropped like a rock, and I’m also in a Dark Age (hence why I’m using the Monasticism Dark Age policy). I’ll explain more in a while. 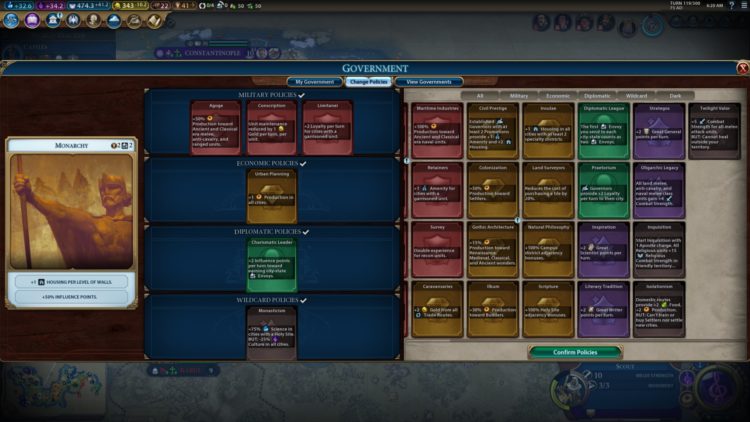 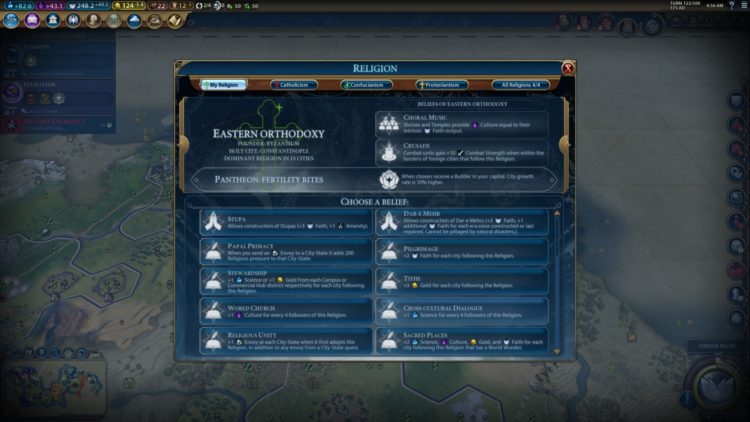 How Byzantium’s deity runs should progress

To be clear, not everything I outline will work out 100% of the time. That’s just how Civilization VI is, and you’ll obviously need a bit of luck. Generally, though, if you could get the ball rolling, then Byzantium becomes an unstoppable machine that’ll quickly snowball out of control.

Anyway, here are some tips for the Ancient Era start: 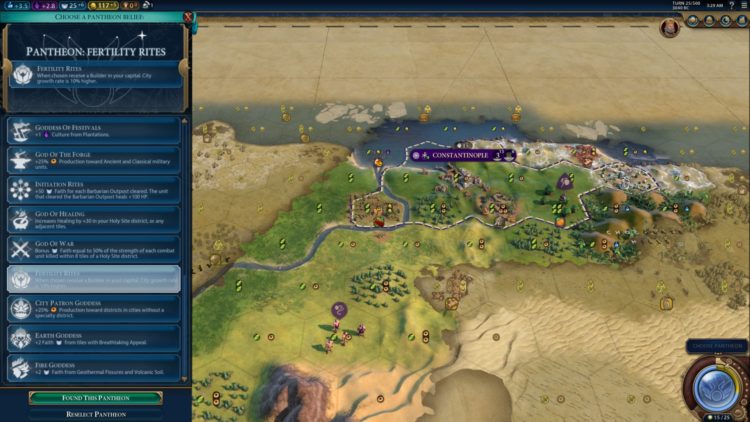 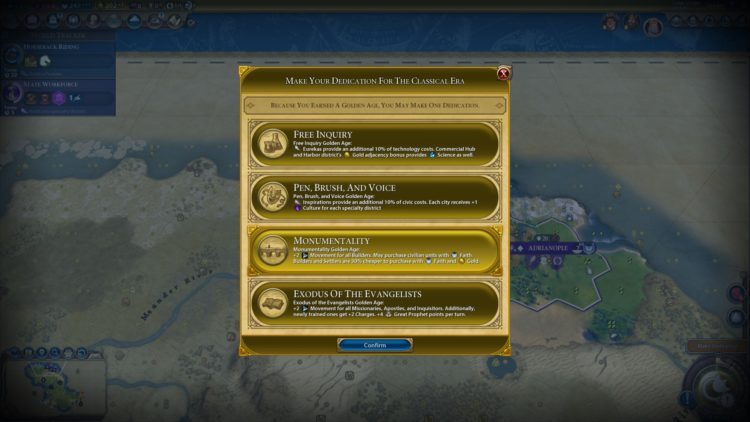 Anyway, the reason we picked the Crusade belief is because of the synergy with Byzantium’s Taxis ability. Defeating units from a civ or city-state will cause your religion to spread to nearby cities (usually +250 points). The distance covered by the spread is quite significant too. It’s possible to completely flip the religion of an entire empire just by defeating its armies.

Because Crusade boosts combat strength when you’re in cities that follow your religion, you’ve practically given your units a buff just by converting an opponent’s settlements. You can see an example below where I converted several Dutch cities in quick succession just by walloping Wilhelmina’s troops with my boosted units that are swarming her territory.

Note: Moreover, Basil II’s Porphyrogénnētos ability lets cavalry units do full damage to cities following your religion. Cities without walls will only take two or three attacks from Horsemen or Heavy Chariots. Meanwhile, ancient and classical walls will get demolished by a handful of Tagma without issues. You’re likely to get a “minor/major victory” when attacking cities with your cav as opposed to horrendous HP losses. 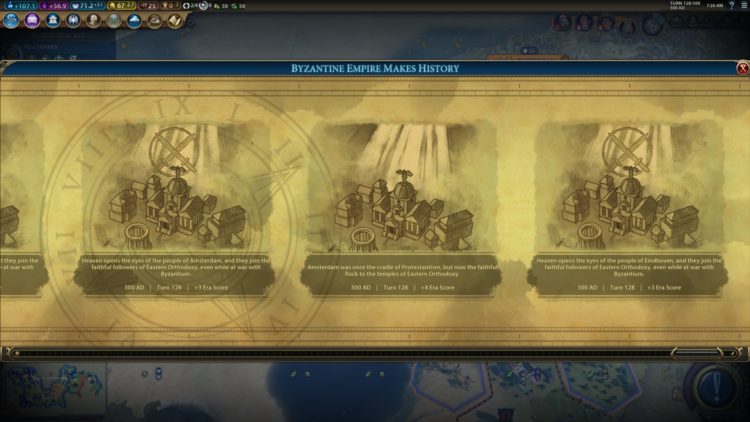 You gain era score for these city conversions since you’re at war with the target leader. That means you can push onwards for another Golden Age. Alternatively, if you had a Golden Age during the Classical Era and you entered a Dark Age during the Medieval Era (which is very likely), you can guarantee yourself a Heroic Age once you reach the Renaissance period. 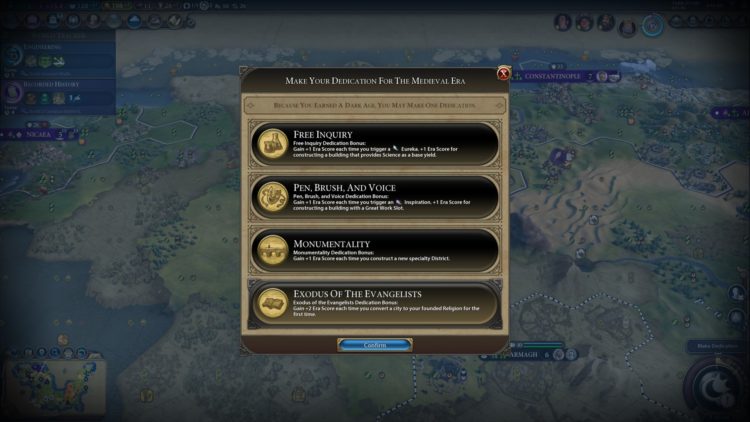 Entering a Dark Age actually helped me because of the Exodus of the Evangelists dedication and the Monasticism policy. For the latter, I had already finished obtaining the Divine Right civic, so there’s no “mandatory beeline” anymore. Even if the Monasticism policy lowered Byzantium’s culture generation, the science increase helped immensely. Plus, the Cross-Cultural Dialogue belief guaranteed that I was getting lots of science from the population of converted cities. 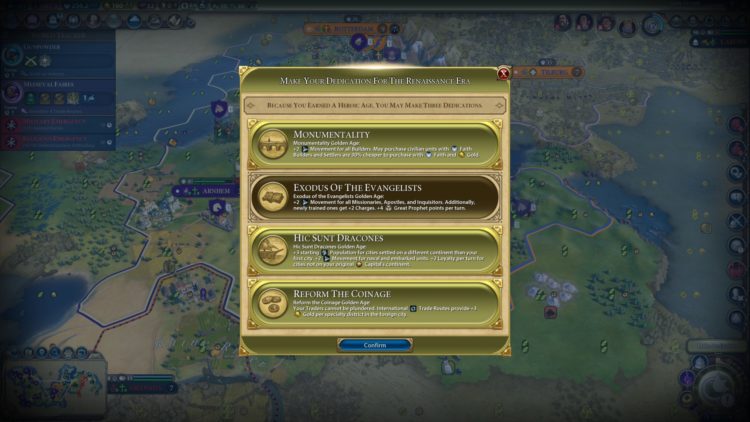 There’s one more factor to consider when playing as Byzantium in Civilization VI: New Frontier Pass and that’s your Tagma unique units. Just to be clear, the Tagmata are extremely powerful units due to their buffs. Additionally, they can be freebies via the Hippodrome. That’s where “Tagma Timing” comes in.

“Tagma Timing” is just trying to hold off on completing Hippodrome constructions until you’ve discovered the Divine Right civic — maybe stop when the Hippodrome is one turn away from being completed. If the Hippodrome gets built too early, you’ll only get a Heavy Chariot. 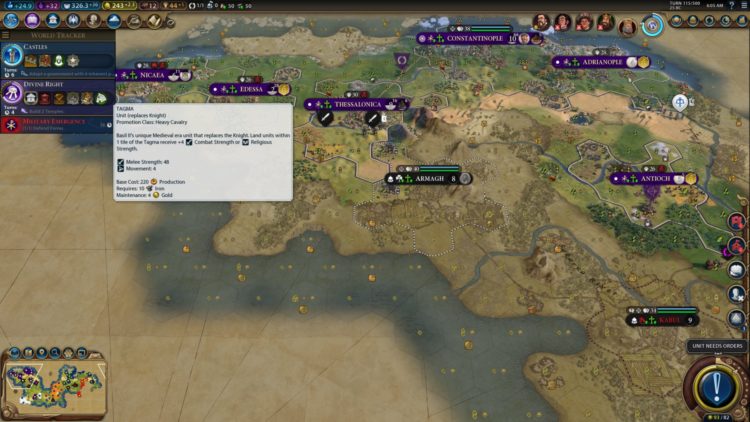 Once Divine Right has been discovered, go complete the Hippodrome construction in your cities so you could get those Tagmata freebies. They won’t cost iron or horses, but they still have upkeep costs (gold). That’s why my income took a nosedive. Still, I was able to keep myself afloat by plundering the trade routes of other civs.

Note: Hippodromes and the buildings related to it (i.e., arenas) grant you free heavy cavalry units like the Tagma. It’s always dependent on the highest-tier replacement that you’ve unlocked. The upgrade path is Heavy Chariot -> Tagma -> Cuirassier -> Tank -> Modern Armor. 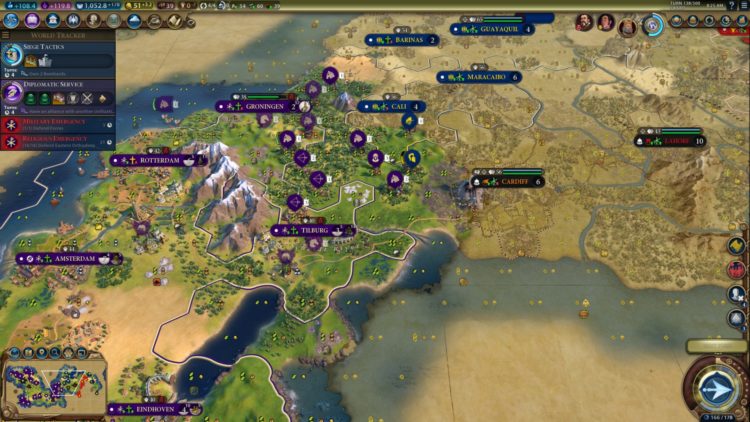 Civilization VI: New Frontier Pass‘ latest addition, Byzantium, is just unbelievably good for deity games. I loathe using the word “OP” to describe something. Nevertheless, this civ is really an absolute monster. Sure, the mechanics will make your playthroughs fairly straightforward. However, the synergy among the uniques makes this civ feel like it has no downsides at all (except maybe the lackluster Dromon unit).

By focusing on a building that grants amenities, the Hippodrome, you gain powerful military units for free. You don’t even waste turns training them. One of those units, the Tagma, happens to boost the strength of others that are near it. Coincidentally, the Tagma, like other cavalry units, will demolish walls and cities with ease thanks to the Porphyrogénnētos ability. Then, because you’re also trampling enemy units, your religion continues to spread to other civs, converting their cities via the Taxis ability.

In short, Byzantium is definitely something you should try out in your Civilization VI: New Frontier Pass deity runs. Basil II lets you breeze through a deity campaign with a Domination Victory. Alternatively, city conversion through unit kills means you could quickly get a Religious Victory too. Everything just works tremendously well, and I’d even give this civ the edge over Simon Bolivar and Gran Colombia. 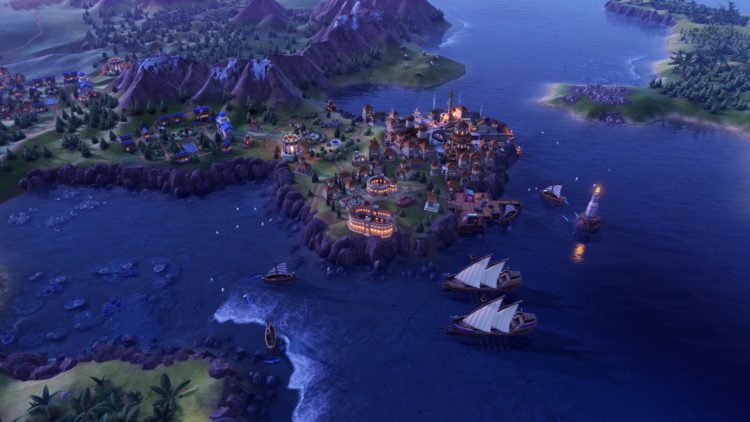 Civilization VI: New Frontier Pass is available on Steam. The Byzantium & Gaul Pack, already included in the season pass, can also be purchased separately. For more information, check out our guides and features hub.