The genre-mashing action strategy game Castlestorm II brings players back to the humorous fantasy kingdom where everyone is looking for an excuse to attack each other. This time around, the world is literally going to hell as the realms of the dead and the living start to merge, causing catastrophic shifts in the landscape. Still, in this cartoonishly light-hearted campaign, the rulers appear to be taking things well in stride as the kingdom struggles to survive and the dead rise up.

Told across two chapters, the campaign starts with the hero Sir Gavin. The stalwart protagonist is looking to get on with some sense of normalcy after the Kingdom is rocked by a series of earthquakes called The Great Calamity, which completely reshapes the land. While doing so, he discovers the cause of the cataclysmic event almost by accident. The second chapter centers on a vampire princess named Luna (who is obviously modeled after Harley Quinn) and sets out to fix problems caused by the first half of the game.

Both chapters include decision points that decide certain aspects of the narrative. For instance, you can decide to launch a sneak attack on a bandit army, or you can try to bargain with them. Negotiations sometimes work to get you extra troops or else they just lead to combat. There are also major choices that have a slightly greater impact on the narrative, but not enough to necessarily justify replaying it.

It’s difficult to encapsulate what the game is, since it mixes several game types together. All at once, the game has some tower defense-like elements mixed with light turn-based strategic role-playing and physics-based castle-bashing similar to Angry Birds. Compared to its predecessor, the sequel offers a much bigger world to explore, and more land to take.

There are essentially two forms of combat. The first involves taking direct control of the hero character or a soldier to battle waves of enemies directly using a variety of skills. Then there’s the combat where you summon a parade of units into combat and cast spells while using a ballista to launch various objects, including shockingly-strong sheep, at oncoming foes while trying not to hit your own troops in a game of capture-the-flag. Sometimes, actual castle storming is involved. Here, you have the option to wreck enemy fortresses as an alternative to stealing their flag. Or you may have to defend your fortress before it’s busted apart. The combat is relatively intuitive and straightforward, even though I never really took to controlling my hero directly. I much preferred backing up my summoned units by shooting enemies in the face with my ballista.

There’s a big Kingdom to explore and conquer.

You’re provided with a hero and a small group of basic soldiers comprised of melee and ranged types at the start of the campaign. You then head out into the world to clear out bandits — alongside aggressive wildlife — while conquering or building castles to gather resources and help grow the army. Your soldiers gain experience with each battle, helping them to level up into tougher fighters who are later reinforced with heavy-hitting advanced units such as knights and giant golems. Different decisions, coupled with how well you clear threats from the land, influence your reputation, which in turn impacts your incoming resources at the start of each turn along with how often enemies spawn. 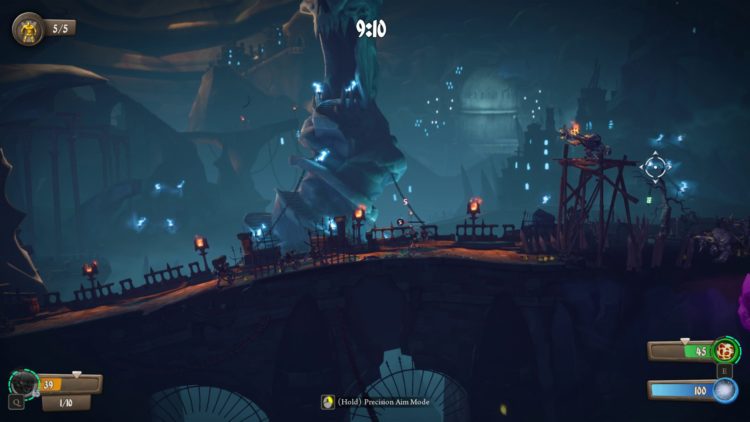 Although the game has a strong start, things go downhill around the 50th turn or so, when the cracks in the system start to show. Although the combat formula worked well in the first game, with narratives that were told through a straightforward series of battle challenges, it doesn’t quite mesh with the sequel’s exploration, resource gathering, and loot-based upgrade system.

Other than perhaps gold, resources aren’t much a problem once you’ve built and fully upgraded a handful of production facilities. The game naturally has you taking over more real estate as you progress, so you’ll soon end up with much more materials than you need – especially when you’ve managed to get your soldier attrition rate down to a few units per battle. Castles and other structures have no upkeep, so there isn’t much to spend resources on toward the later parts of each chapter except to replenish your troop, ammo, and spell count. I couldn’t even find a way to donate a portion of my vast resources to the kingdom to increase my reputation. This issue is compounded by how Castlestorm II’s loot system undermines the strategic parts of its gameplay. 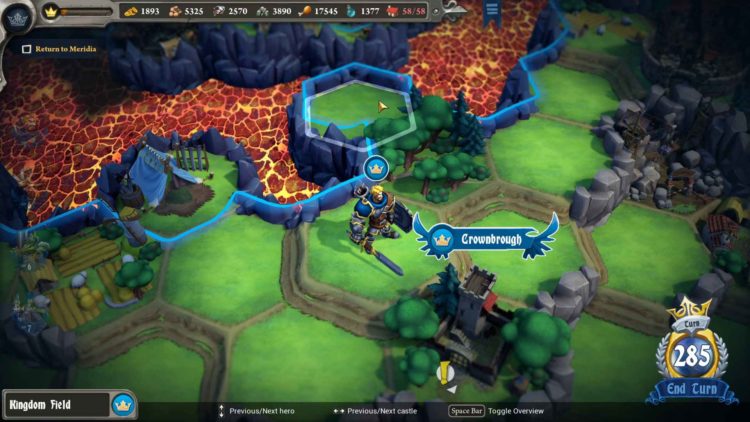 Toward the end of Chapter 1, I had far more resources than I knew what to do with.

For instance, it becomes clear very quickly that roaming the vast world with a single hero is a huge chore. But you don’t pick up additional heroes until about halfway into each chapter, which is far too late for them to be effective. The low-level enemies and castles that you used to level up your main hero aren’t there anymore, so your new leaders and their level 0 units are stuck at a severe disadvantage. With no way to train units outside of combat, new heroes have little to do besides stand around and hope for a low-level random encounter spawn to come their way, which is rare with a high reputation. Nor is it always worthwhile to purchase new soldiers from the mercenary camps, since they’re randomly available. In my playthrough, these camps would rarely offer advanced units such as flying creatures or giants. 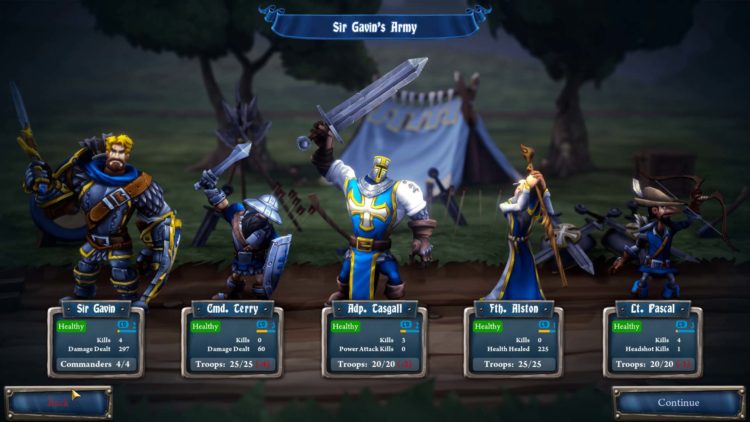 Your main hero gets the best of everything while secondary heroes have to make do. Typical feudal society.

Luna gets the worst of things in Chapter 2. Unlike the living, her undead faction cannot construct anything that mines for gold, which discouraged me from using advanced units for fear of being unable to replace them. There’s a trading post that exchanges food for gold, but it doesn’t appear until halfway through the chapter and it requires Luna to walk up to it. Additionally, the underworld mercenary camp doesn’t tell you upfront what you’re recruiting, and there’s no option to refuse. I completely gave up on it after getting nothing but basic units. To add insult to injury, the camp will only deal with Luna directly, which meant she had to trek all the way back for a chance to outfit her supporting heroes with troops. It’s far easier to stick with your main character, who is already loaded up with top-level units, to plow straight through the lands.

Castlestorm II is full of systems and ideas that aren’t fully thought out. Advanced ballista and castle designs are given to you as random loot, making it near impossible to outfit all your heroes and strongholds with proper weapons and defenses. In a sense, it’s almost fortunate that the enemy AI isn’t very smart and will repeatedly attack the same castles. Still, being forced to set them up with low-level castle designs and units can make defending them a slow-going struggle. 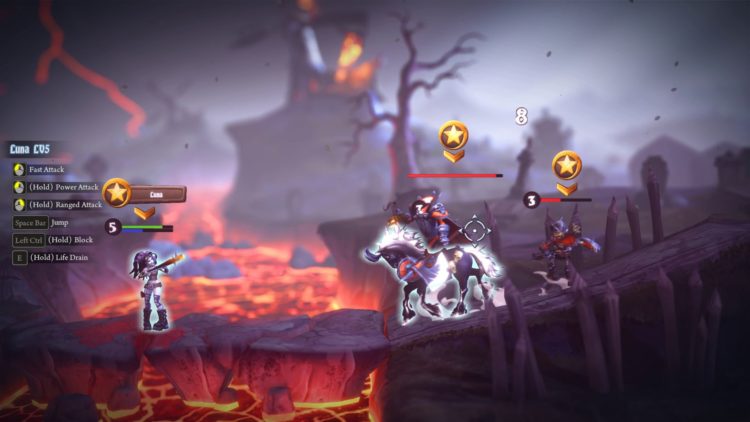 On top of that are issues with the hero-only combat. Enemies will occasionally fail to register as dead, forcing you to restart the whole challenge. It can be ridiculously easy to make short work of powerfully foes by repeatedly shooting them in the head, knocking them back, and stunlocking them. However, missing can just as easily spell doom for your hero. There’s no way to dodge attacks, and blocking is pointless against fiery projectiles. Luna is again shortchanged in the combat department. Her life draining power doesn’t work against certain enemies, which seems completely arbitrary and dumb. Worst of all, she goes into a “Nah-ah” animation to let you know that her ability doesn’t work, leaving her vulnerable to attack.

There are numerous oversights and missed opportunities in Castlestorm II. Neither its beautiful artwork nor its humorous charm is enough to hide its flaws. In many ways, the sequel feels like a step backward compared to the first game. There are only two spell types to equip, you can’t custom design your castle, and its hit-or-miss (mostly miss) loot economy is a poor replacement for the predecessor’s straightforward system. That’s not to say that the game is terrible, but it certainly needs a lot more tweaking and adjustments. 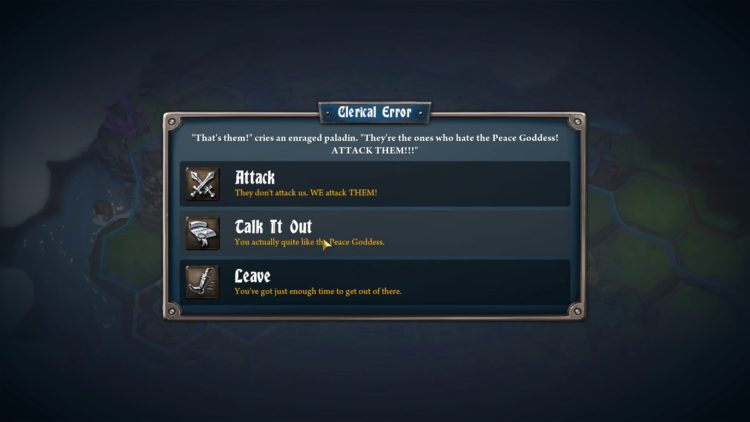 The game likes to offer some sense of choice, but things usually end up in combat.