Rogue-likes and rogue-lites are a genre that you can find an abundance of on Steam. There are many examples of great games of this genre, but they come with their own design risks. Their random nature means that if a developer isn’t careful they can ruin how their game works from the get-go. This sadly means that for every Enter the Gungeon or Slay the Spire there is an Against the Moon.

Against the Moon‘s problems begin right at the design level. In most rogue-lite card games, even though the enemies you face and dungeons you enter may be randomly generated, typically your cards are not. The decks you play, if not the specific cards in them, are a known quantity to some degree. Against the Moon does not take that same approach. You have a collection of cards that you can expand by spending in-game currency gained through playing on “research”. Research adds one random card to your overall collection, and it costs more every time you use it.

The problem comes in when you enter battles. You have three lanes on which your main heroes, called Ultori, randomly appear (more on that in a bit), and you summon creatures to deal damage to the enemy’s units and attack their leader. The concept alone is simple enough. But each time you play a story mission or go on a run, the cards you start with are completely random. You can unlock more cards for your deck during your run by using “metacubes” that can be awarded after only certain battles, but this is a fundamental flaw in the game’s design. It would be the equivalent of taking a giant box of random Magic: The Gathering cards, shaking them up, and grabbing 60 to make a deck. This gives the player no control over how they want to play and means the cards you unlock may never show up in your deck.

Have you seen Dune?

One of the golden rules of card game design is that you want players to be able to play with their cards. This may seem obvious, but the way that Against the Moon is designed means you have almost no control over which of your cards you can actually play with. Another element that compounds this is the sheer randomness of battles. In one of the story missions, I had a unit that could not die that I had to protect. I also had an enemy on board that I could not defeat. This enemy was designed this way as they leave the board after three or four turns for story reasons. There are only three lanes where characters can be placed and which one they are placed on is completely random. Again, removing even more of the player’s control. So there were several times where the unit that can’t die and the enemy that I can’t kill are on the same lane and I have to immediately restart the fight because that unit will die before the enemy leaves.

Against the Moon is filled with frustrating design decisions like this and it takes the simple-to-learn and, admittedly, fun combat and shoots itself in the leg repeatedly. The story of the game is another instance of wasted potential. In a far-future Earth, the Moon itself is trying to destroy humanity and summons creatures to try and take out what is left of the human race. What is left of humanity is huddled in a giant city protected by an ancient being who creates heroes called Ultori with special powers to protect the people.

None of the “how” or “why” is properly explained in the game and most of what I just said isn’t directly told to the player either. You have to infer most of it by nature of having watched other sci-fi films and played other sci-fi games before. On the flip side of that, if you have seen practically any dystopian sci-fi movie before you can see each of the story beats coming a mile away. The music is also extremely limited and loops after a very short amount of time on maps and menus. There seems to only be a small handful of tracks and you will hear the same song again usually after a very short amount of time. I found myself turning the in-game audio off after only a few minutes with each new map I entered. Against the Moon has a unique world with a unique premise that I would have liked to see explored a lot more. The constant spelling and grammatical errors in the game’s text don’t help with keeping your immersion intact either. 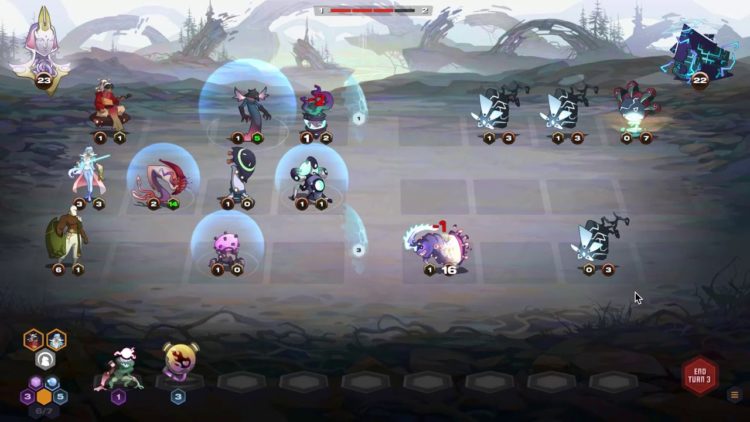 You should probably just watch Dune

Almost all of the problems might have been made more tolerable if there was lots of story and content to dig into, but there is not. This game is not in early access, this is supposed to be a full release for $20. For that $20 the player gets two story missions that take only an hour to beat each, and an endless mode that just pits you against waves of randomly spawned enemies on randomly-generated maps. In a world where games like Fall Guys and Among Us exist that provide such a superior level of quality for either free or super cheap, this is unacceptable. I originally thought I had a beta code when I started the game because, to be honest, it didn’t even cross my mind that this was the entire game. The other four story missions are labeled “coming soon” which is completely unacceptable for a fully-released $20 game.

Against the Moon is a game of missed opportunities, flawed design, and borders on unfinished. If this game was in early access, or maybe even $5, a lot of these problems could be remedied. Sadly, these issues are too ingrained into the core of the game to make it recommendable to anyone. Especially when so many other better rogue-lite games, as well as rogue-lite games with card-based combat, already exist for a similar price or less.